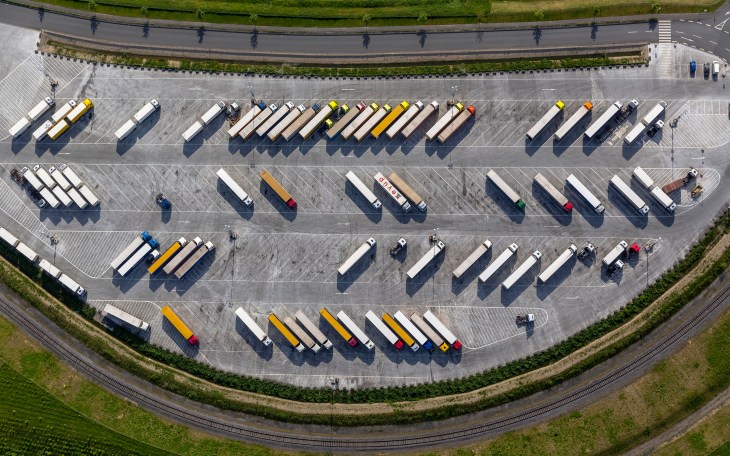 As the COVID-19 pandemic makes health officials urge us all to stay at home, truckers are doing the exact opposite of that to help us live our lives inside. Now, more than ever, package delivery and stocked grocery shelves are luxuries we rely on – and the trucking industry is working hard to keep it up.

To help optimize this industry, San Francisco’s TrueNorth has developed a platform so independent truckers can better manage the way they do business. The company offers software for truckers to streamline all the moving parts that come with a delivery, from the routes they take to how long they spend on billing invoices.

TrueNorth, which graduated from Y Combinator just a few weeks ago, has raised $3 million at a $15 million valuation from a crop of investors, including OpenAI CEO Sam Altman, the former president of YC, and Kevin Lin, the co-founder of Twitch. The company raised $600,000 during YC from investors like Jack Altman, Parker Conrad, and Peter Fishman.

Co-founded by Jin Stedge and Sanjaya Wijeratne, TrueNorth wants to help independent truckers solve various pain points that come with running your own operation, like finding good routes and consistent well-paying jobs. Other focuses include optimizing trucker paperwork and billing.

Truenorth isn’t tackling the truckers that work for large companies like JB Hunt. It’s tackling the ones that own and drive their own trucks.

While TrueNorth is trying to solve long-existent inefficiencies within trucking, tech has already taken a few swings at the sector. Despite this overwhelming reliance, Stedge, the co-founder of TrueNorth, says that little innovation has happened to bring tech to the trucking industry.

As mandated by the government, truckers must track their days in 15-minute increments on an electronic logging device. KeepTruckin’s hardware helps them do this.

Samsara  is another competitor that helps drivers track their hours through hardware and software. While KeepTruckin and Samsara are trucking startups, they’re not direct competitors of TrueNorth. The two startups help truckers remain compliant by tracking data, and TrueNorth manages that data.

When asked why Samsara wouldn’t just pivot to start doing what TrueNorth is doing because it already has the presence, Stedge compared both companies to the hospital system. Hospitals use electronic medical record systems to log patient records. Those systems are highly regulated and complex because of HIPAA-compliance and patient tracking, so hospitals lean heavily on them for that very specific need. But, Stedge said, there are a lot of other activities that go into taking care of patients at hospitals.

So think of Samsara as the highly complex electronic medical record system and TrueNorth as the hospital. Samsara is a core piece of technology of truckers, and TrueNorth as an outsider that comes in and optimizes that technology all under one roof. That’s increasingly important for an independent trucker that doesn’t have the backing of a large fleet of resources — which is exactly the customer that Stedge is trying to onboard.

She has a personal competitive edge when it comes to understanding her customer: Stedge was adopted as a child by a family of truckers, and for over 40 years her family has been part of the industry.

The capital will be used to build out the development team, and Stedge plans to hire three to four more people.

When it came to fundraising, Stedge talked to 30 to 40 investors in a span of four days.

Stedge tells me that she raised the round within a week after Demo Day, which for the first time ever, was fully digital due to COVID-19.

However, don’t jump to assuming that a fully Digital Demo day meant deal-making was any easier for this batch. The investors in TrueNorth’s seed round were largely from warm intros from the $600,000 round it raised during YC. In fact, Sam Altman invested after his brother, Jack Altman,  put capital into the company.

So instead, TrueNorth’s seed financing is an example of a longtime truth in the YC funding craze: The best companies are often able to secure funding, or at least seedlings of it, before Demo Day itself.

As for the valuation, TrueNorth’s latest round brings it to the aforementioned $15 million in valuation. That number is high for normal startup standards, as one report shows that the average seed stage startup valuation hovers around $7 million.

For YC, $15 million is on-par and perhaps even a little conservative. Stedge claims that she had “multiple other offers at higher valuations.” The company’s choice to pursue a lower valuation could offer a glimmer into the changing attitudes around absurdly high valuations in the seed stage world.

Stedge mentioned that investors felt like they had to move pretty fast this time because of market fluctuations. As for the founder, she took a second to rewind to 2008 to better understand what she was up against.

“I researched what happened in the 2008 downturn, and what happened was a lot of the independent truckers went out of business first,” she said. “If your costs are high, you have very little wiggle room for your revenue to decrease, and they struggled to find jobs quickly.”

That history lesson, Stedge said, gave TrueNorth some welcomed validation and even more of a drive to speed up its plan to help truckers operate more efficiently.