LaneAxis, which is a cloud-based freight logistics company, is currently running a crowdfunding campaign on StartEngine. So far, the company has raised $399,000 at a $7.97 million valuation. 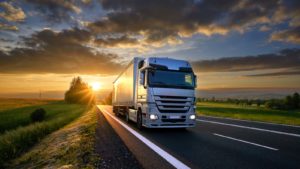 The founder and CEO of the company, Rick Burnett, was a partner in a trucking company and saw first-hand the problems with the industry. Burnett recognized that there was much inefficiency and manual processes that could be vastly improved with modern technologies.
The current situation is the result of several major trends. The first one emerged during the 1980s, when there was wide-scale deregulation of the trucking industry. While this helped to bring down costs, there was also the growth of brokers and third-party logistics (3PL) companies. As these organizations scaled, they were able to benefit from high fees, which have weighed on margins for shippers and carriers.
Then in the 1990s, the internet started to impact the trucking industry. If anything, online platforms were able to expand the power of brokers and 3PLs. The result was the development of managed services, which have continued to rake in huge profits.
But there are other problems with this ecosystem. First of all, the vast majority of U.S. trucking operators are small (that is, with six or fewer rigs). Because of this, they lack much negotiating power.
What’s more, the trucking industry remains a patchwork of legacy technologies as well as processes that involve phones, manual forms and even faxes. The fact is that a large part of the trucking industry is still stuck in a bygone era.
So the vision of LaneAxis is to use the power of cloud technology and blockchain to centralize the activities, allowing for greater efficiencies and visibility. It’s essentially a sophisticated marketplace, which seamlessly connects shippers with large numbers of drivers.
There is then access to real-time insights on the capacities – and each transaction is backed with electronic contracts, insurance certificates, shipment documents and final proofs of delivery. All this not only optimizes processes but also allows for the reduction of empty truck miles, which is accomplished by sending “revenue alerts” to the smartphones of drivers.
Interestingly enough, the impact of the novel coronavirus may actually help accelerate the need for a comprehensive network as well.
“The supplies are actually there, there’s just no visibility into the network,” says LaneAxis Founder and CEO Rick Burnett. “The truckers are out there, and the carriers are out there, and the products are there. It’s just, there’s no visibility to be able to move those products on a timely fashion to be replenished on a day-to-day basis, so that people now realize that there’s plenty of supply. They don’t have to go buy what they feel like is a 2 or 3 month supply.”

The market opportunity for LaneAxis is definitely enormous. The annual revenues in the U.S. trucking industry are close to $500 billion and there are 3.5 million truckers, which make 35 million shipments each day. Data from trucks.com forecasts that shipments will increase 35% by 2027.
And yes, LaneAxis has made progress with is solution. Back in March 2018, the company was granted a patent on its shipper-carrier optimization platform. It was also able to put together several key partnerships, such as with the American Association of Owner Operators (AAOO), which has 100,000 driver members.
Yet, LaneAxis still in the nascent stages — and there are considerable risks. Perhaps the biggest one is the challenge of creating a marketplace. After all, other mega companies are making attempts at this in the trucking industry, such as Uber (NYSE:UBER) and Amazon.com (NASDAQ:AMZN).
In other words, LaneAxis will likely need to raise much more money. So as with any startup investment, is very important to read the materials and do your own research on the opportunity.
Tom Taulli (@ttaulli) is the author of various books on investing and technology, including Artificial Intelligence Basics, High-Profit IPO Strategies and All About Short Selling. He is also the founder of WebIPO, which was one of the first platforms for public offerings during the 1990s. As of this writing, he did not hold a position in any of the aforementioned securities.
Original Source: https://investorplace.com/2020/04/laneaxis-aims-to-disrupt-the-massive-trucking-industry/