After bottoming out at the beginning of May, truckload freight volumes recovered to pre-COVID-19 levels and largely returned to seasonal patterns in the second half of the month, according to DAT Freight & Analytics, which operates the industry’s largest online marketplace for spot truckload freight. Reefer and flatbed numbers ended up positive month over month, with van rates and volume down slightly due to early-month lows.
The DAT Truckload Volume Index, a measure of dry van, refrigerated (reefer) and flatbed loads moved by truckload carriers, rose 0.6% from last month but was 8% off as of May 2019.
“As businesses begin to reopen across the country and produce season ramps up, we’re seeing a trend back to pre-COVID levels, consistent with seasonal market dynamics,” said Ken Adamo, chief of analytics at DAT. “There’s also increased demand at major ports and signs that June will be a strong month for freight.”
Nationally, the May load-to-truck ratio for vans nearly doubled to 1.9 compared to last month and was up slightly from this time last year as well, indicative of a market with more freight than trucks posted on the DAT network. The spot van rates averaged $1.58 per mile nationally, down 4 cents compared to April and 21 cents versus May 2019.
Spot reefer volumes were up 10% month-over-month due to seasonal produce freight, as fruit and vegetable harvests increased. The reefer load-to-truck ratio was 3.1, compared to an all-time low of 1.7 loads per truck in April. The national average reefer spot rate was $2.01 per mile, up 9 cents compared to April but 14 cents lower year over year.
A ramp up in construction contributed to a sharp increase in the national flatbed load-to-truck ratio, 12.5 in May, up from an all-time low of 5.3 in April but still off of March highs (21.8). May flatbed volume was up 5 percent from April but down 17 percent from the prior year. The national average flatbed spot rate was $1.90 per mile, 3 cents less than April and the lowest since September 2016. 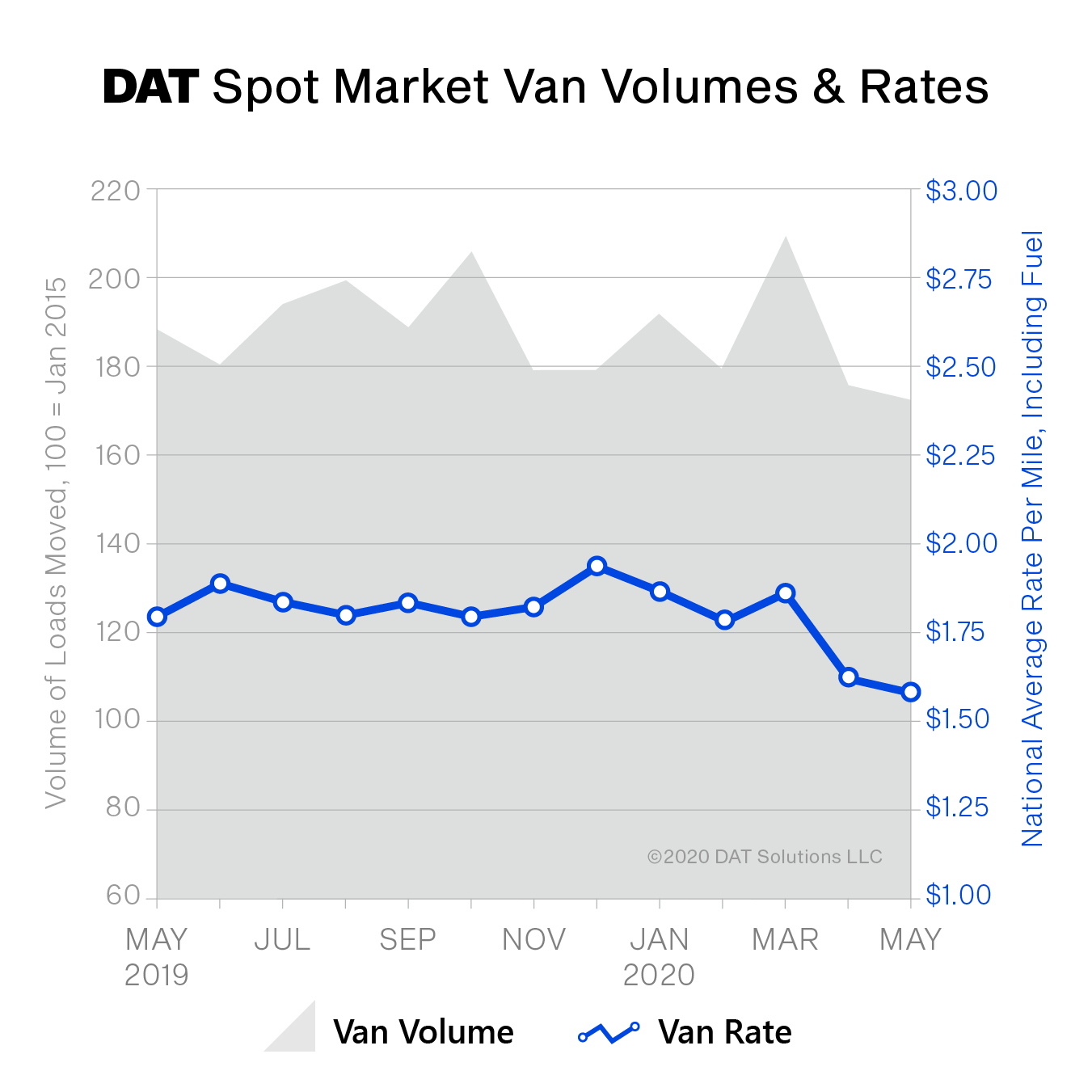 Photo: DAT Solutions
DAT freight outlook
Forecasts indicate that the spot market has bottomed out and is trending upwards into June. Ratecast and Market Conditions Index – predictive metrics from DAT iQ – anticipate higher prices and volumes, as states reopen, produce season heads northward, and port markets like Los Angeles; Houston; Savannah, Ga.; and Philadelphia, see higher volumes.
“There was a deep hole to climb out of due to the economic downturn, but we’re seeing the market stabilize,” Adamo said. “The economic engine of the country restarted and picked up momentum towards the second half of May and into June.”
Original Source: https://www.fleetowner.com/news/economics/article/21134076/dat-spot-market-stabilizes-to-precovid19-levels